Anacamptis picta or Anacamptis morio subsp. picta, a Mediterranean subspecies of Anacamptis morio, can be found in the National park of Pindus, in short, poor grasslands, meadows, alpine pastures and forest fringes at elevations up to 2000 meters as a miniature to small sized, cold growing terrestrial with sometimes 3 tubers giving rise to 5 to 9 basal, oblong-lanceolate to oblong-ovate leaves the uppermost becoming leaf sheaths and blooms in the spring on a pyramidal, or oblong, 2 to 4″ [5 to 10 cm] long, many [5 to 15] flowered inflorescence with the uppermost flowers opening last and lanceolate bracts. It resembles a lot Orchid morio.

The following pictures were taken in late April close to the creek by the Chapel of Agios Menas in Dilopho. 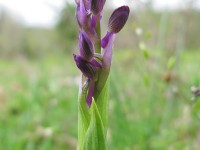 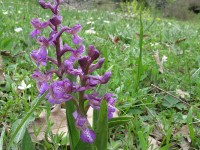 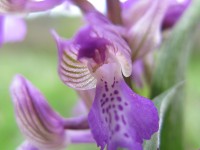