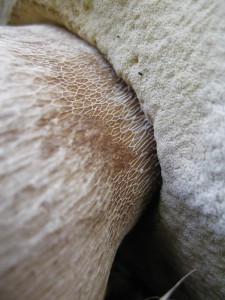 The name is derived from the Latin term bōlētus ‘mushroom’ from the Ancient Greek “βωλίτης”, ultimately from bōlos/βώλος ‘lump’ or ‘clod’. In Greece Boletus is also called “the king of mushrooms” – “βασιλομανίταρο”.

The fruit body has a large cap which on occasion can reach 35 cm (14 in) in diameter and 3 kg (6.6 lb) in weight. Boletes, have tubes extending downward from the underside of the cap, rather than gills; spores escape at maturity through the tube openings, or pores.

The genus Boletus contains many members which are edible and tasty, not the least of which is the famed Boletus edulis which can be picked in the oak forests of the Zagori region during spring and autumn.

Among the most tasty boletus mushrooms is boletus edulis which is considered one of the safest wild mushrooms to pick for the table, as no poisonous species closely resemble it.
It is widely known as porcini, which means “piglet” in Italian, and echoes the term suilli, literally “hog mushrooms”, used by the Ancient Romans, and still surviving in Southern Italian words for this mushroom. The derivation has been ascribed to the resemblance of young fruit bodies to piglets, or to the fondness pigs have for eating them. It is also known as “king bolete”.