Cantharellus cibarius, or else known as the chanterelle, golden chanterelle or girolle, is a fungus. It is orange or yellow, meaty and funnel-shaped. On the lower surface, underneath the smooth cap, it has gill-like ridges that run almost all the way down its stipe, which tapers down seamlessly from the cap. It has a fruity smell, reminiscent of apricots and a mildly peppery taste (hence its German name, Pfifferling) and is considered an excellent edible mushroom.

It first appears around May in the Zagori mountains of Epirus, depending on the weather conditions, and also during fall, around October. 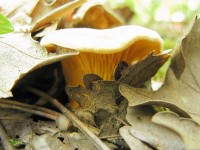 Under the oak leaves 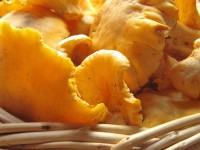 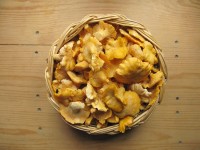