A CNN article about winter in Greece

Not just for summer: 6 reasons to head to Greece in winter according to a CNN article on winter destinations in Greece

Greece is so closely linked to summer vacations that it rarely features in winter escape plans. That’s a shame, because while it rules the Mediterranean in the heat of July and August, it’s also got some pretty cool moves in the dead of December. Falling temperatures sprinkle new magic on stone-built villages lost in deep forests and medieval castles built into that beautiful Greek coastline. Throw vibrant cities into the mix, along with buzzing ski resorts — yes, ski resorts — and a whole new perspective of the country opens up.

Here are six classy places to consider for a Greek winter getaway. 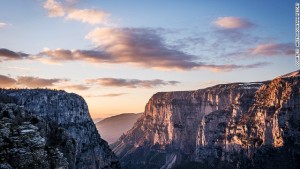 A hidden mountainous treasure in the Epirus region of northwestern Greece, Zagorochoria is a complex of 46 stone-built villages.
This parkland ecosystem is where locals take special guests to illustrate their ideals of natural beauty. Scenic mountain roads and traditional arched stone bridges interconnect tiny villages filled with guesthouses and little cafes.

The main hub for northern Greece, Thessaloniki is an all-year round destination. A hotspot, compact in size, the city’s Tsimiski, Mitropoleos and Proksenou Koromila streets are filled with fashionable boutiques. There are fancy bars along Valaoritou Street, and many restaurants in between. Its many engaging museums, important archaeological sites and byzantine monuments are an ideal winter cultural fix.

Hiking trails, villages and ski slopes with panoramic views of the Aegean Sea and the Pagasetic Gulf make Pelion a strong winter destination.
The mythical mountain of Centaurs lies in the southeast part of the Thessaly region, forming a peninsula surrounded by water. Pinakates village, in west Pelion, looks like a scene from a painting, with stunning mansions and photogenic cobbled streets.

Located in the heart of Greece, the Evritania region has traditional villages, stunning gorges, heavily forested mountains and historic monasteries.
There’s plenty to do outdoors, including snow-fueled fun at Velouhi Ski Resort, on the slopes of Mount Tymfristos, followed by apres ski in the lively regional capital, Karpenisi. Nearby, plenty of attractive villages offer traditional guesthouses and boutique hotels. 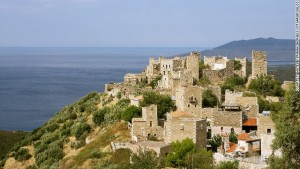 Located on the middle of the three peninsulas of southern mainland Greece’s historic Peloponnese region, Mani stands at the meeting point of the Ionian and Aegean Seas.
Home to more than 96 traditional villages, Mani is dotted with traditional tower houses, Byzantine churches, sheltered coves, gorges and a coastline that provides a dramatic backdrop for any winter road trip. There’s a local saying: 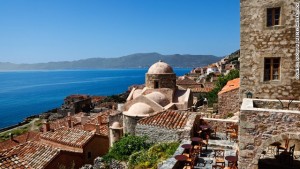 In the southern Peloponnese, the old town of Monemvasia is one of Greece’s best-preserved Byzantine citadels. It’s a fairy tale-style castle, off limits to cars, located on a small islet linked to the mainland by a bridge. It looks as if it’s floating on the Myrtoon Sea. It’s surrounded by aristocratic mansions, churches, hammams, fountains and winding paths. Monemvasia’s important role during the Byzantine period is still evident in the walls that dive into the deep blue sea.

By Rania Margari for CNN

Rania Margari is a freelance journalist with an interest in travel, food and lifestyle stories. Based in Lausanne, Switzerland, she’s been writing for Greek and international publications since 2004.