The forests of the National Park of Vikos-Aoos produce a vast variety of fruit throughout the whole year. Some are mentioned below but are only a small part of the richness of the land. 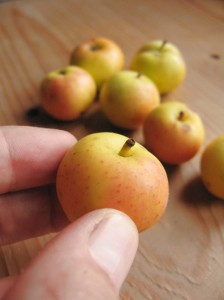 Apple trees are typically 4–12 m (13–39 ft) tall at maturity, with a dense, twiggy crown. The leaves are 3–10 cm (1.2–3.9 in) long, alternate, simple, with a serrated margin. The flowers are borne in corymbs, and have five petals, which may be white, pink or red, and are perfect, with usually red stamens that produce copious pollen, and a half-inferior ovary; flowering occurs in the spring after 50–80 growing degree days (varying greatly according to subspecies and cultivar).

Crabapples are an excellent source of pectin, and their juice can be made into a ruby-coloured preserve with a full, spicy flavour. A small percentage of crabapples in cider makes a more interesting flavour. As Old English Wergulu, the crab apple is one of the nine plants invoked in the pagan Anglo-Saxon Nine Herbs Charm, recorded in the 10th century.

Apple wood gives off a pleasant scent when burned, and smoke from an apple wood fire gives an excellent flavour to smoked foods. It is easier to cut when green; dry apple wood is exceedingly difficult to carve by hand. It is a good wood for cooking fires because it burns hot and slow, without producing much flame.

Crabapple has been listed as one of the 38 plants that are used to prepare Bach flower remedies, a kind of alternative medicine promoted for its effect on health. However according to Cancer Research UK, “there is no scientific evidence to prove that flower remedies can control, cure or prevent any type of disease, including cancer”. 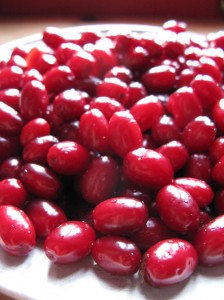 It is a medium to large deciduous shrub or small tree growing to 5–12 m tall, with dark brown branches and greenish twigs. The leaves are opposite, 4–10 cm long and 2–4 cm broad, with an ovate to oblong shape and an entire margin. The flowers are small (5–10 mm diameter), with four yellow petals, produced in clusters of 10–25 together in the late winter, well before the leaves appear. The fruit is an oblong red drupe 2 cm long and 1.5 cm in diameter, containing a single seed.

Rubus is a large genus of flowering plants in the rose family, Rosaceae, subfamily Rosoideae. Raspberries, blackberries, and dewberries are common, widely distributed members of the genus. Most of these plants have woody stems with prickles like roses; spines, bristles, and gland-tipped hairs are also common in the genus. The Rubus fruit, sometimes called a bramble fruit, is an aggregate of drupelets. The term “cane fruit” (or “cane-fruit”) applies to any Rubus species or hybrid which is commonly grown with supports such as wires or canes, including raspberries, blackberries, and hybrids such as loganberry, boysenberry and tayberry.

Prunus spinosa is a large deciduous shrub or small tree growing to 5 metres (16 ft) tall, with blackish bark and dense, stiff, spiny branches. The leaves are oval, 2–4.5 centimetres (0.79–1.8 in) long and 1.2–2 centimetres (0.47–0.79 in) broad, with a serrated margin. The flowers are 1.5 centimetres (0.59 in) diameter, with five creamy-white petals; they are produced shortly before the leaves in early spring, and are hermaphroditic and insect-pollinated. The fruit, called a “sloe”, is a drupe 10–12 millimetres (0.39–0.47 in) in diameter, black with a purple-blue waxy bloom, ripening in autumn, and harvested—traditionally, at least in the UK, in October or November after the first frosts. Sloes are thin-fleshed, with a very strongly astringent flavour when fresh.

Prunus spinosa is frequently confused with the related P. cerasifera (cherry plum), particularly in early spring when the latter starts flowering somewhat earlier than P. spinosa. They can be distinguished by flower colour, creamy white in P. spinosa, pure white in P. cerasifera. They can also be distinguished in winter by the more shrubby habit with stiffer, wider-angled branches of P. spinosa; in summer by the relatively narrower leaves of P. spinosa, more than twice as long as broad; and in autumn by the colour of the fruit skin—purplish-black in P. spinosa and yellow or red in P. cerasifera. 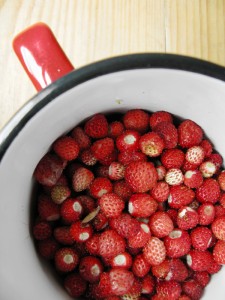 Fragaria /frəˈɡɛəriə/is a genus of flowering plants in the rose family, Rosaceae, commonly known as strawberries for their edible fruits. There are more than 20 described species and many hybrids and cultivars. The most common strawberries grown commercially are cultivars of the garden strawberry, a hybrid known as Fragaria × ananassa. Strawberries have a taste that varies by cultivar, and ranges from quite sweet to rather tart. Strawberries are an important commercial fruit crop, widely grown in all temperate regions of the world.