Origanum vulgare subsp. hirtum (Greek oregano) is related to the herb marjoram, oregano also being known as wild marjoram. It is a perennial, although it is grown as an annual in colder climates, as it often does not survive the winter months. It grows to 20 inches, with purple flowers and spade-shaped, olive-green leaves.

Oreganum Vulgarius (mountain Greek). Sun. Perennial. Height: 10-12” Can Spread up to 24” wide. Also known as Wild Oregano, this oregano is referred to as Mountain Greek because the seeds come from the mountains of Greece. Has a very strong and spicy hot flavor. 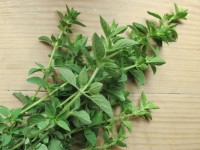 Close up of leaves of Greek oregano 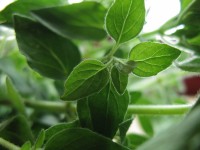