Morchella deliciosa is a species of edible fungus in the family Morchellaceae. It is a widespread species that is characterized by having white ridges, at least when young.
They are found growing in the mountain of Mitsikeli, in the Zagori region in Epirus, under fir trees or in small meadows a midst the fir trees from March to May.

It is one of the most tasty and sought after mushrooms but must be well cooked before eaten! 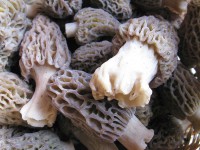