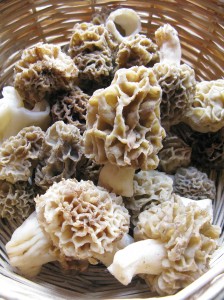 Morchella esculenta, (commonly known as common morel, morel, yellow morel, true morel, morel mushroom, and sponge morel) is a species of fungus in the Morchellaceae family of the Ascomycota.
It is one of the most readily recognized of all the edible mushrooms and highly sought after.

Each fruit body begins as a tightly compressed, grayish sponge with lighter ridges, and expands to form a large yellowish sponge with large pits and ridges raised on a large white stem.

They are found growing in the mountain of Mitsikeli, in the Zagori region in Epirus, under fir trees or in small meadows a midst the fir trees from March to June.