Museums in the region of Zagori

On display are entire traditional kitchen sets as well as traditional furniture, tools, clothing and jewellery and traditional costumes of the Zagori region from previous centuries. In total over 40.000 exhibits were collected by the founder Agapios Tolis for the creation of this museum. It is located in Kipi village in Central Zagori. 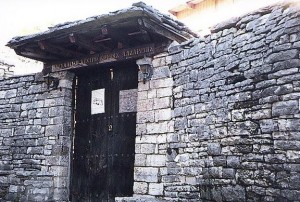 Kostas Lazarides was born in Koukouli village in central Zagori in 1904 and died in 1987. He worked 23 years as a teacher in the village and other parts of Greece. His interest in the history, folklore and botany of his native Zagori led him to collect and record about 1,300 different species of herbs and plants from the surrounding area and the Vikos Gorge. These are well documented and displayed in the museum for the visitor to see and study.

The museum, in addition to the unique and valuable collection of herbs, houses a library with many old books, newspapers, magazines and photographs, artifacts from the period he served as a teacher, and many personal belongings. It is worth mentioning that many of these herbs were used in the past by physicians of the region, called “Viko-giatroi” or “Doctors of Vikos”, to heal their patients. 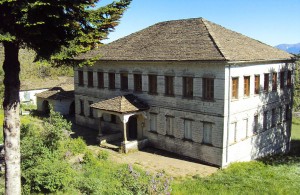 Paschaleios School was found in 1861, by Konstantinos and Pavlos Paschalis, merchants and benefactors, and one can find there one of the four copies of Rigas Fereos chart (a Greek writer, political thinker and revolutionary that lived between 1757 –1798). The building has 14 rooms and a very well updated library.
The school is in Kapesovo village which was renowned for its painters, called mpogades (Greek: Μπογάδες), that worked in dozens of churches from Moscopole to Arta, during the 18th and 19th centuries.
Kapesovo experienced a great flourishing until 1860 and this is evident in the great manors with folk wall paintings and churches with paintings (hagiographies) in their interior. The church of Aghios Nikolaos, built in 1793, the cultural center and the folkloric museum are some of the village’s attractions.

Boarding School
The Rizarios Boarding School in Monodendri is opened in 1962 offering until today hospitality to many pupils and students from all Zagori villages. 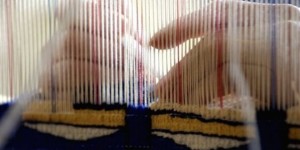 Handicraft School
Close to the exhibition center, you can find the Rizarios Handicraft School, the famous institution founded in 1979 as part of the educational, cultural and social activities of the Rizarios Ecclesiastical School in Epirus. The school imparts training, free of cost, to girls, particularly in traditional arts and handicrafts that are gradually becoming extinct.

Exhibition Centre
The Center is located in Monodendri village in Zagoria. It was founded in 2001 as a tribute to the brothers Manthos and Georgios Rizaris, who were natives of Monodendri. The brothers achieved great success in commercial enterprises in Russia and offered substantial financial aid to the Greek War of Independence. Moreover, they used their vast wealth to create a large charitable foundation. The Rizarios Centre is housed in Pantazis Mansion, an old manor that has been renovated by the Rizarios Foundation. The programs organized at the center refer to the Greek and the Balkan area. There is a special emphasis on the promotion of the photographic heritage of Greece. There is also an outdoor theater that hosts important theatrical and musical performances. 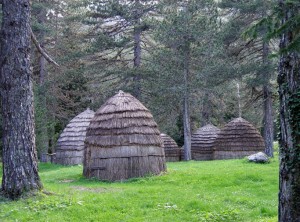 Sarakatsani Hamlet at Gyftokampos is a reconstruction of a Sarakatsani Hamlet close to Skamnelli village in Central Zagori, Ioannina Prefecture, NW Greece. The location is 58 km north of Ioannina. Its name is derived from the Greek “gyftos” (γύφτος), gypsy and “kampos” (campus) that means “field”, and could be rendered in English translation as “gypsy lea”. There used to be a hamlet called Nouka on this location which was also used by the Sarakatsani as pasture grounds. The area, located at the base of Mt Tymfi, has traditionally belonged to the village of Skamneli and it forms part of the municipality of Tymfi. Until the early 20th century, the area was open and used as a grazing ground by the Sarakatsani . It has become gradually wooded by coniferous trees, including impressive Scots pines. Huts of Sarakatsani were in use until the 1990s. Today an open air “museum” with typical Sarakatsani huts and animal enclosures has been built. The area is used for an annual Sarakatsani festival in the first week of August. The visitors can see the huts where the the Sarakatsani used to live in, the furniture they used, the kitchen utensils, the cheese making tools, the animal sheds and many other things from the lives of these nomadic people.

The Information Center Papingo of WWF

The “Papingo Information Centre for nature and culture in Zagori” is located in Mikro Papingo. The Centre is accommodated in the building of the old Primary School, next to the church of the Taxiarhes.

WWF’s aim is to keep this old building alive as an “open school for nature”, bringing the local community and the visitors in contact with the nature and culture of Pindos. On the upper floor of the Centre, WWF Greece has established a permanent exhibition for the natural and cultural values of Pindos. At the basement, information is offered about WWF Greece’s activities in Greece, whereas a small shop operates for the promotion of local products.