Among the most sought after forest fruit, such as blackberries, cornus mas and wild strawberries, that the forests of the National Park of Vikos-Aoos produce are the rose hips which abound in the area of Zagori.

Rose hips are particularly high in vitamin C content, one of the richest plant sources available. Rose hips contain plenty of lycopene, an important and strong antioxidant that prevents oxidation of low density lipoprotein (LDL) as well as of many cellular membranes. Lycopene in rose hips differs more in its isomer distribution than in other sources (tomatoes, pink grapefruit).

Rose hips also contain some vitamin A and B, essential fatty acids, and antioxidant flavonoids.

A study of a rose hip preparation for treating rheumatoid arthritis concluded that there was a benefit, apparently due to both anti-inflammatory and anti-oxidant effects. Rose hips are used to help prevent colds and influenza. 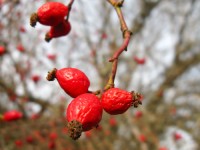 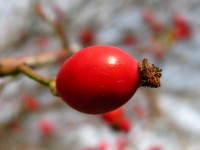 Close up of a rose hip

← The villages of Zagori
Melissa officinalis →