Explore the caves in the area of the National Park of Vikos-Aoos with the experienced and certified cave guide Manolis Diamantopoulos..
..

The Zagori area, among it’s natural attractions, offers a variety of vertical caves-gulches and precipices some of which are found in the area around the village of Papingo, which lies near Gamila and Astraka peaks of Mt. Tymfi. Some of them bear names inspired from mythology, such as the “Hole of Odysseus”, and “Chasm of Epos”. These are being studied and explored by caving enthusiasts. The cave of “Provatina” (“Ewe’s Cave”), with a depth of 408 m (1,339 ft), one of the deepest worldwide, was first discovered in 1965 by British speleologists of the Cambridge University Caving Club, and has since then been surveyed by a large number of expeditions. The nearby “Chasm of Epos”, with a depth of 451 m (1,480 ft), drains the water coming from the surrounding plateaus. Another cave worth mentioning is the “Griffon vulture pothole” at a depth of  584m (1.916 ft) the deepest in the area of Mt. Tymfi.

Mount Tymfi represents a series of uplifted fault blocks and faulted escarpments and is largely composed of Palaeocene-Eocene limestone, with some exposures of Campanian-Jurassic dolomite and limestone on the northern scarp.

A special feature of the limestone, resulting from its weathering by water, is its karstic* nature. During the large Middle Pleistocene glaciations, surface runoff from glacial meltwaters would have fed directly into the river channel network because much of the upland limestone terrain was covered by ice, and many conduits in the karst would have been choked with sediment or permanently frozen. As a result, the glacier snouts came close to the modern valley bottoms. In contrast, during interglacial and interstadial periods, more effective coupling occurred between the surface drainage network and the internal karst drainage system. Since limestone dissolves as the water percolates through its pores, an extended underground drainage system has developed, with caves and channels that enlarge with time when their roofs collapse, producing rocky exposures and perpendicular slopes, which is also the reason why the water is scarce. Only when an impenetrable stratum is met, does water appear on the surface.

* Karst topography is a geological formation shaped by the dissolution of a layer or layers of soluble bedrock, usually carbonate rock such as limestone or dolomite, but also in gypsum.

Another cave in the vicinity of great interest is the cave of Perama which was accidentally discovered in 1940 during World War II, when the residents of the nearby village were seeking refuge from on-going bombings. The cave, extending five kilometres below the ground and having been explored fully only up to one kilometre, has a remarkable arrangement of stalagmites and stalactites. 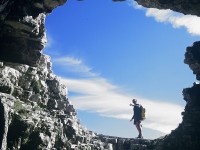 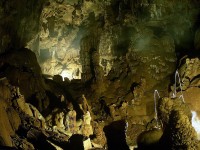 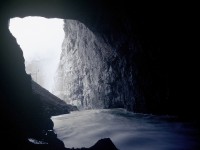 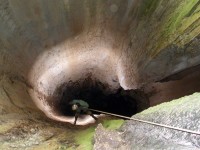 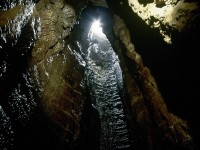 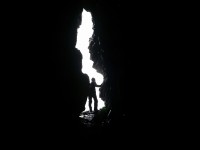 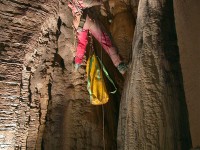 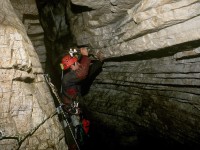 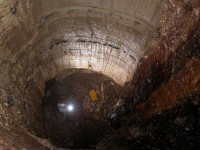 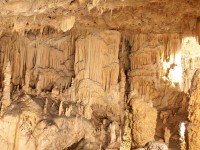