Villages are built around a central square, also called mesochori (village centre) with a large church, a plane tree and a public fountain. Cobbled streets and footpaths interconnect the rest of the village. Each individual neighbourhood has a smaller church.

Houses until the 18th century were simple rectangular dwellings, often with only a ground floor and with ancillary areas in the basement used as stables. Indeed this appears to be the style of construction of the dwellings in the excavated Molossian site near Vitsa. Houses are built of local stone and have a slate roof. The roof slates are held together without cement, only by the weight of the slates above them. The slate roof therefore requires continual upkeep, subjected as it is to heavy snowfalls during the winter months.

That older type was developed through the 18–19th centuries into more complex styles all the way to the multi-storied manors of the wealthier families of the late 18th century. Many houses are fronted by a walled courtyard or garden. The courtyard gate is an edifice in itself, covered by a slate roof and connecting the house to the rest of the village. In addition to the house, there are ancillary buildings, usually a “mageirio” (kitchen), an external toilet at the furthest corner from the kitchen, and stables. The main house is built with walls up to a meter thick that may have an internal sand compartment for insulation against the cold. The house entrance opens into the foyer called “hagiati” which leads to adjoining rooms called “ondas” or “mantzato”. The hagiati originally was and sometimes still is a partially open area in front of the house. The name is probably derived from the Persian word Hayāt, a style of Persian garden with pavilions or other edifices. The mantzato is the main room for the winter months with a fireplace, a “tavla” (table) and seating areas that can be used as beds, called “basia”. Opposite the fireplace there is a walled closet called “mesantra”. As an aid to its function, the mantzato often has a location in the south of the house.

A usually wooden staircase leads from the hagiati to the upper floor landing called “krevatta”. This is a space between the bedrooms. In rare cases, the krevatta opens into a small balcony covered by a wooden roof. “Glavané” is a small entrance to the attic. The basement of the house contains cellars and other storage areas that may be used as additional quarters for animals.

Few of the old manors survive, most having fallen victim to disrepair. In those that survive, the ondas room is the most spacious, has a large fireplace and may have floral frescoes. It was used for the reception of guests.

Most churches in Zagori date from the 17–18th centuries onwards, although some older foundations survive. In most villages the main church consists of a sizeable basilica built of stone with a wooden roof covered by slate. They are decorated by mainly Epirotan hagiographers in the Byzantine tradition. The entrance to the church may be protected by a colonnaded arcade. The campanile is usually detached from the church.

Zagori is an area of great natural beauty, with striking geology and two national parks, one including the river Aoos and the Vikos Gorge, the other around Valia Kalda, to the east of the imposing snow-capped Mt Tymphe. The 45 or so villages of Zagori were interconnected by mountain roads and traditional arched stone bridges until modern roads were opened in the 1950s. The stone arched bridges were built by benefactions from expatriate merchants in the 18th century and replaced older wooden bridges. 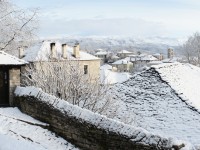 The first snow of the winter 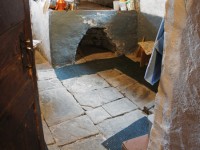 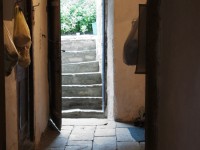 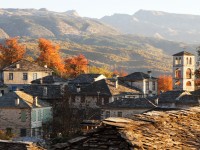 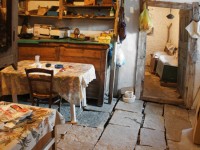 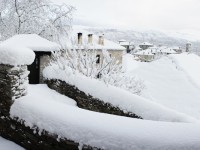 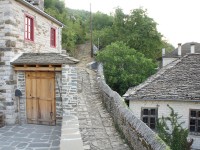