Vegetation zones in the National Parks of Pindos

The Pindus Ecoregion (National Parks of Vikos-Aoos and Valia Calda) covers a wide range of elevations and habitats, from deep canyons to steep mountains.
This wide range in altitude results in four major forest zones:

Large breeding colonies of herons, spoonbills, egrets, and pelicans fish the cool waters of the mountain lakes of the Pindus Mountain Conifer and the Broadleaf Mixed Forests ecoregion. This is one of the few areas in Europe where the rare Dalmatian pelican can be found. Wolves, jackals, and bears are also found in the forests.

The park was established in 1966 and is considered one of the most important protected areas for the maintenance of mountainous biodiversity and ecosystem integrity at the national level. Forests of European black pine (Pinus nigra) and common beech (Fagus sylvatica) cover the park’s lower and middle altitudes 1,000 to 1,600 m (3,300 to 5,200 ft), with several of these trees being more than 700 years old. At higher altitudes 1,600 to 1,900 m (5,200 to 6,200 ft), Bosnian pine (Pinus heldreichii) woodland is dominant, while at the greatest heights 1,900 to 2,177 m (6,200 to 7,142 ft), only certain types of bushes are found in the treeless alpine meadows.

Additionally, the dry places and the lower parts of the valley are characterized by the domination of Buxus sempervirens, while some individuals of Abies borisii-regis are scattered among the Pinus nigra and Fagus sylvatica forests. In total, 415 types of plants and 86 species of mushroom are recorded in the area. A number of local flower types are considered endemic to the Balkans, such as Dianthus deltoides and Allium breviradum. On the other hand, many endemic plants of central and northern Greece grow also in the park, like the Centaurea vlachorum. Moreover, rare species of the forests of Pindus mountains, typical of the lower geological layers, are Minuartia baldaci, Bornmuellera tymphaea, Campanula hawkinsiana, Viola dukadjinica and Silene pindicola. The most important places for the gathering of rare plants are the northern slopes of the peaks of Aftia, Flegga and Kapetan Kleidi. A lot of places are very steep and difficult for grazing animals and therefore natural regeneration of the forest in those areas is progressing normally and many rare plants are conserved. The serpentine soil, which is dominant in the area of the Pindus National Park, also favours the growing of rare endemic plant species. 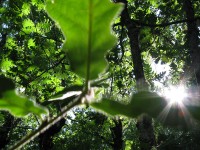 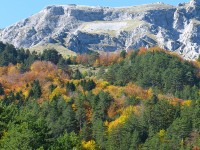 A mixed broadleaf forest during fall 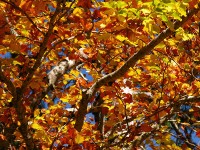 Golden-yellow beech (fagus) leaves in a forest in Central Zagori 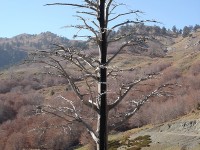 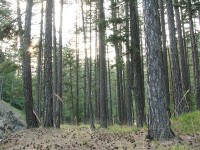 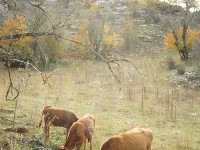 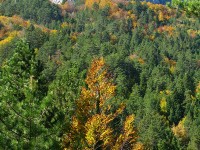 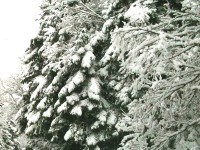 Following is a brief description of the main vegetation zones of Pindus Ecoregion:

The main feature of this environment is mild winters, accompanied by a moderate rainfall. These conditions are favorable for the development of plant formations consisting almost entirely of sclerophyllous trees , i.e. with leaves of leathery texture, gradually renewed every year. A regular feature of this plant community is the prevalence of oak which forms forests that are commonly called ilex.

Other trees of this zone are:

These trees can be found at the lower parts (400m-700m) of the National Park such as the Vikos Gorge, Voidomatis river and Aoos river.

This zone is mainly populated by thermophilic deciduous trees form forests with various types of oak:

and other trees such as:

This zone is dominant at altitudes of 600m to 1000m, around most of the traditional stone villages of the Central Zagori, and at the villages by the river Venetikos in Grevena and the valley of Kerasovitis river.

Typical altitudes of this zone are those between 900m-1600m. Forests with such trees can be found at Smolikas Mt., northern Tymphe Mt., Basilitsa Mt., Augo Mt., Baltses Mt., Zygos Mt. the biggest part of the National Park of Valia Calda and the Central and Eastern Zagori.

This zone stretches up to 2.000m, but is fragmented and degraded due to uncontrolled and extensive grazing during the summer months.
Pinus heldreichii trees can be found in the mountain summits around Valia Calda National Park in Grevena, in Smolikas Mt. and around Katara area and small populations of Pinus silvestris in the valley of Valia Calda and Flegga Mt., most likely the remains of the last Ice Age.

← Xmas in Zagori
The shrine of Dodona in Epirus →