Material of Geopark is courtesy of Georgia K. – geozagori@gmail.com

The Vikos Canyon (greek=φαράγγι Βίκου) is 10 km long and has vertical, steep and rocky slopes that are hundreds of meters high. The combination of the tectonic- karstic phenomena created favourable conditions for intense erosion forming the deepest Canyon of the World (Guinness Book of Records, 2005). The extensive hydrological basin of the Voidomatis river reveals a high karstic field. During the Pleistocene and the alternating glacial and interglacial periods huge volumes of water was released. The geodynamic processes of the past had created fast ascendant movements and the discontinuities caused by the faults had deeply carved by the flowing water. Vikos Canyon revealed the stratigraphic column of the limestone blocks that were created millions of years ago in Tethys Sea. When one visits Vikos Canyon can see on a natural scale this succession of limestone which now- after all these complex geological processes- can be found at altitudes reaching 2,400 metres! 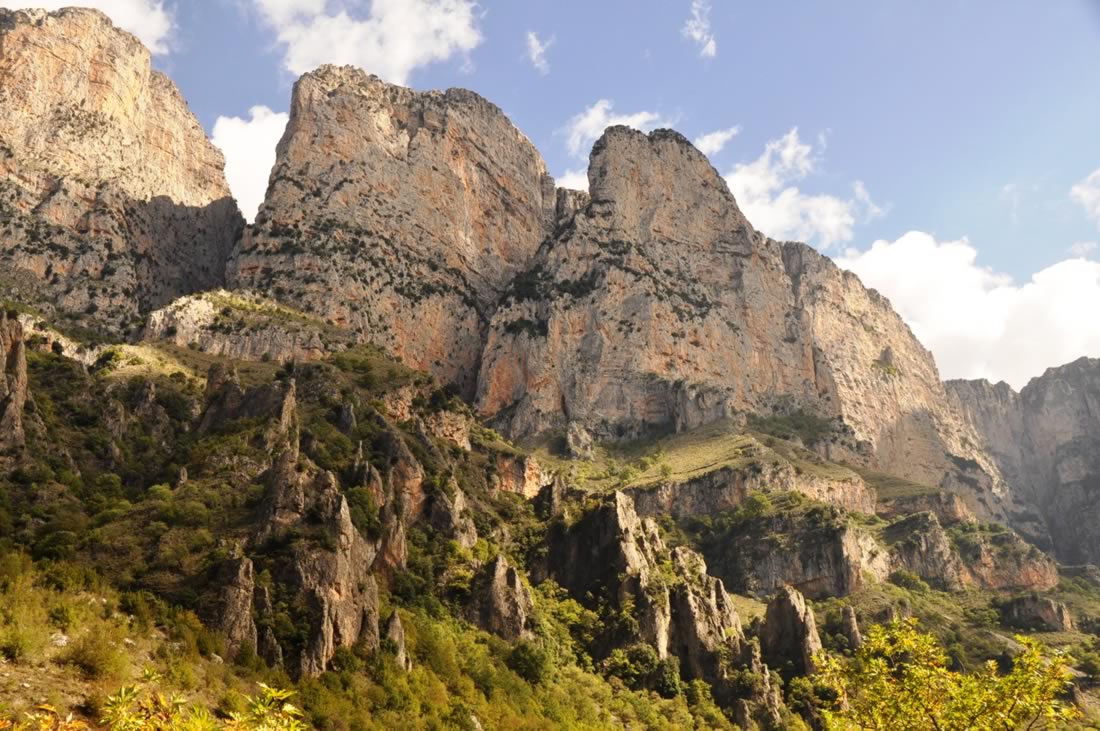 Theoktista (greek=Θεόκτιστα, God-made landscape) are layers of limestone forming impressive tower-like structures due to the vertical erosion of the stream. The gaps between the layers are remnants of old karstic ducts. Stone-built bridges (Missios, Kokkoris, Kontodimos and Plakidas) are located around this area. Near the river bed characteristic structures, such as chert lenses, breccias and synsedimentary folds can be distinguished. Also some of the most famous traditional stone-built villages (Kipi, Koukouli, Vitsa) complete the scenery.

The art of nature and man

Here you will enjoy unique examples of the wonders that Nature and the human hand can create. To name but a few: the Mezaria (greek=Μεζαριά) stream that flows on the zone of the Kapesovo fault, the Vradeto stairs (greek=σκάλα Βραδέτου), proof that architecture and nature can co-exist in harmony, Tripa Kalogrias, a spectacular precipice formed by the erosive power of water on limestone, the viewpoint at Beloi (greek=Μπελόη), that offers a panoramic view over the majestic geology and karstic landscape of the region, and Tripa Nifis, an impressive cylindrically-shaped cave.

What else can one ask for? 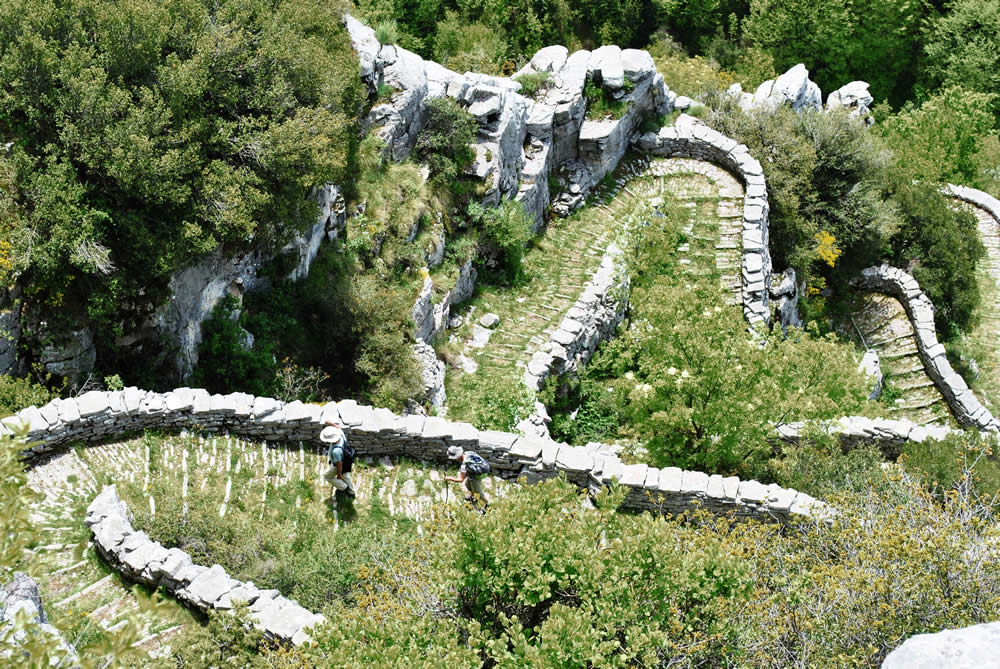 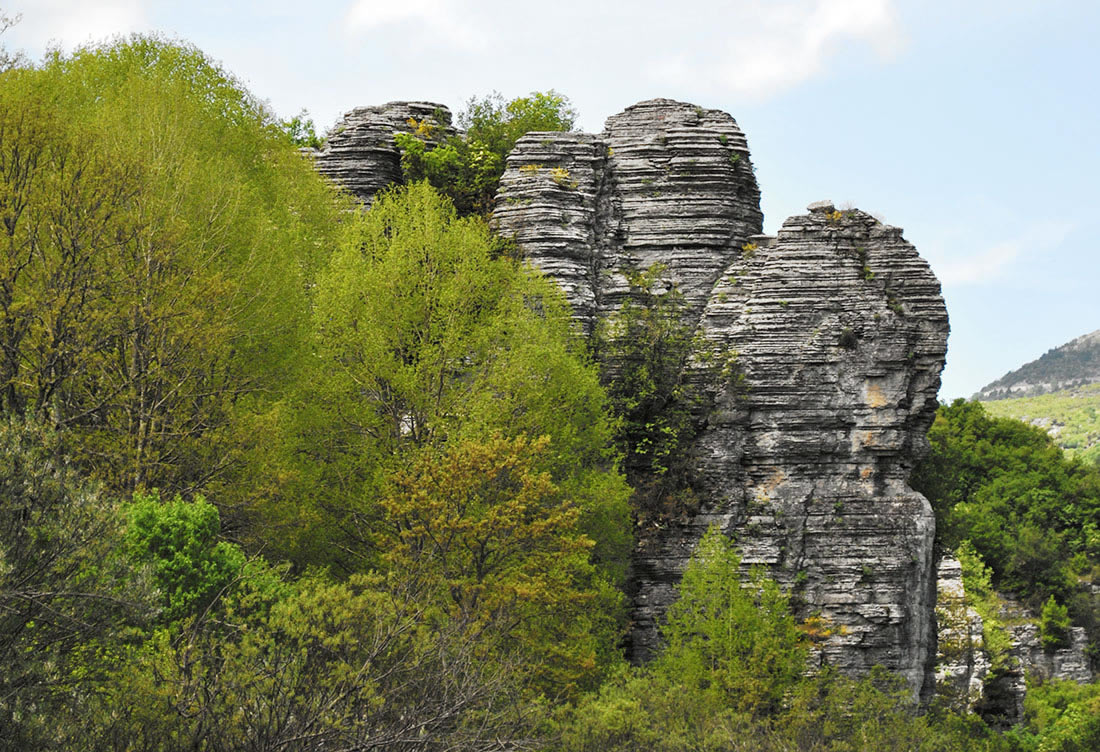 Kolibithres or Ovires (greek=Οβίρες) are natural swimming pools! They are traced on the thin-horizontal layers of limestone constitutes exquisite forms of erosion on Rogovo’s stream bed. Bistiries is a system of rock shelters that were formed due to the differentiation of limestone in the vertical erosion of the river. Limestone is colored by impurities like iron oxide that makes it red, brown or yellow, while carbon makes it gray, black or blue.

Tymfi (or Mt Tymphe, Timfi also Tymphi, greek=Τύμφη) is part of NW Pindos and was carved by water, very quickly, during the Pleistocene. Visitors will come across several plateaus with alpine vegetation, complex relief and spectacular altitude variations.
There are geotrails to Dragon Lake at 2,100 m. (greek=Δρακόλιμνη), Xeroloutsa (a formation which was created after the retreat of the glaciers), Gamila and Astraka peaks (greek=Γκαμήλα, Αστράκα), Provatina (one of the deepest vertical precipices worldwide, -407m deep) and Hasma Epous (a double scalar precipice, -451 m and -419 m deep), which are among the most interesting complex geological alpine environments.

Kazarma’s round, a geodynamic and glacial tour

A round trip for interpreting features of geological processes like folding, faulting and some of the specific landscape of Timphi’s glacial remnants. Folds in rocks vary in size from some meters to mountain-sized folds. In the valleys above Tsepelovo and Skamneli multiple moraines crests are well preserved. These glacial deposits display evidence of glacial retreat. Up of these moraines limestone pavements are well developed forming a complicated glacio-karst landscape.