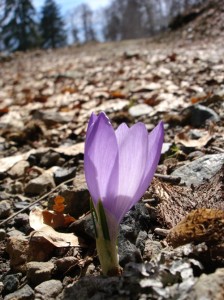 Crocus is a genus in the family Iridaceae. Saffron Crocus bears up to four flowers, each with three vivid crimson stigmas, which are the distal end of a carpel. Together with the styles, or stalks that connect the stigmas to their host plant, the dried stigmas are used mainly in various cuisines as a seasoning and colouring agent. Saffron, long among the world’s most costly spices by weight, is native to the Zagori region of Northwestern Greece. The Pindus Mt. slopes turn purple in fall when the flower blooms.

The word has its origin in Greek mythology. Krókos was a dear friend of god Mercury (Hermes) in Ancient Greece. One day, while the two friends were throwing the disc to each, Mercury hit Krókos on the head and wounded him fatally. As the young man collapsed and while dying three drops from his blood fell on the centre of a flower thus becoming the three stigmata of the flower named after him. Etymologically, the word crocus derives from the Greek word “króki” = “κρόκη”, which means weft, the thread used for weaving on a loom.

The spice derived from the flower of Crocus sativus is called saffron. Saffron’s aroma, is often described by connoisseurs as reminiscent of metallic honey with grassy or hay-like notes, while its taste has also been noted as hay-like and sweet. Saffron also contributes a luminous yellow-orange colouring to foods. Saffron is widely used in traditional Greek, Indian, Persian, European, Arab, and Turkish cuisines. Confectioneries and liquors also often include saffron. 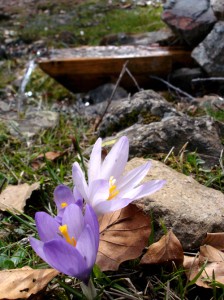 Saffron has a long medicinal history as part of traditional healing; several modern research studies have hinted that the spice has possible anticarcinogenic (cancer-suppressing), anti-mutagenic (mutation-preventing), immunomodulating, and antioxidant-like properties. Saffron stigmas, and even petals, may be helpful for depression. Early studies show that saffron may protect the eyes from the direct effects of bright light and retinal stress apart from slowing down macular degeneration and retinitis pigmentosa. (Most saffron-related research refers to the stigmas, but this is often not made explicit in research papers.) Other controlled research studies have indicated that saffron may have many potential medicinal properties.

Crocus in general is an excellent stimulant. The healing properties of the plant are also countless! Its highly anti-inflammatory and its profound antioxidant properties have been proved true for long. Furthermore, crocus prevents platelet aggregation and improves cerebral function.
Other properties of crocus enable lowering cholesterol, improving digestion, preventing nausea and soothing infant teething while its cancer preventive properties are being researched.