The Greek Culture Ministry announced that it intends to officially sponsor the traditional villages of the Zagori (Zagorochoria) district in Epirus, northwestern Greece, as a Greek “cultural landscape” to be added to the UNESCO World Heritage list. For the last two years, the “Zagorochoria – North Pindos National Park” area have been on the UNESCO Tentative List – one of the conditions for inclusion in the list of World Heritage Sites.

Zagori (“the place behind the mountains”, from the Slavic za “behind” and gora “mountain”) constitutes a distinctive geographic and cultural unit of great architectural and environmental interest. Its own inhabitants divide it, based on the natural boundaries traced by the local rivers, into four subunits: Vlachozagoro, Lakka Zagoriou (the villages in the Zagoritikos river valley), the Villages of the Ano Vikos Valley and the Villages of the Voidomatis Valley. These four subunits form a single territorial unit, Zagori. Its first settlements, its oldest core, lie in the west part of present-day Zagori (Papigo and Pedina). The two other parts developed later. Most of the modern villages were established during the Ottoman period, while most of the villages of East Zagori were founded in the 15th century. All the villages have been through periods of prosperity and decline, so their numbers have not been constant. Zagori was never inhabited by occupying forces, but always remained a self-governing community (“To Koinon ton Zagorision”, The Common of the Zagorisians). During the Ottoman period, Zagori established a special relationship with the Ottoman administration: it was self-governed, autonomous and enjoyed tax exemptions, in return for sending a number of youths (called voiniks) to Constantinople to work as grooms of the Sublime Porte. As a result of this complex historical experience there were no tsiflikia (tsiftlik: a big landed property created under a specific law provision of the Ottoman Rule) in Zagori. Another outcome of the historical evolution in the area was that due to the restricted financial opportunities available to the inhabitants, handicraft production (pre-industrial mass production of goods for trade) was not developed in large scale, unlike in other parts of Epirus. The local economy was based on livestock farming, forestry, farming and revenues coming from emigration. Fertile, cultivatable lands are few and found in the east, as are the dense forests, while the central and western regions are more suitable for livestock farming. Due to the Zagorisians travelling abroad, the area became rich and prosperous. From the 18th century onwards, the emigration of male inhabitants became widespread, while farming and herding activities were left in the hands of the women.

The communities of Zagori are self-sufficient and autonomous, but also open to immigration and modern ideas. There are various social groups: the Zagorisians (autochthonous), the Metoikoi (people from other places of the Epirus region who were assimilated after years of permanent settlement; most of them came from Lakka Souliou; there were also a few Gypsies who settled on the outskirts of villages), the Sarakatsani (nomad pastoralists), and a large population of Vlachi (transhumant pastoralists and farmers, mainly in the villages of northeast Zagori).

The particular socioeconomic conditions (wealth and cultural influences from Zagorisian emigrants, community self-management/autonomy), and the specific historical experience of nomadic and transhumant pastoralism (Sarakatsani and Vlachi respectively), gave rise to an important and unique cultural capital, the intangible cultural heritage of the region. 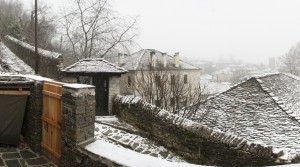 The architecture of the Zagorochoria (“Zagori villages”) is exceptionally interesting. In a dialectic relationship with the intact natural environment and the particular climate conditions, it constitutes a unique combination of cultural and natural heritage. The villages are densely built and defensive in character. They are monocentric, with a single centre, the mesochori (village square), where all public functions are gathered – the church, the school, the kafeneion (coffee shop, the place were men used to socialize), the vryssi or krini, the name given to the village’s source of fresh water (coming from a nearby spring or well); this sort of fountain is usually decorated with traditional motifs sculpted on stone or marble; most of the fountains are of exceptional architectural value and were a place for social interactions mainly between women. The houses are arranged around the square, in different neighbourhoods (mahalades). Despite their basic common features, the villages in the four subunits of Zagori present some differences in their vernacular architectural style, due not only to the natural environment and building materials, but also to the discrete social character and tradition of each area. In the east, forests and wood predominate. Along with the predominance of the nomadic and transhumant pastoral way of life in the east, the architectural forms here are less austere, freer and more pleasant. To the west the dominant features are the hard, rocky surfaces of Mount Pindos and a stricter social organisation, with a corresponding effect on the architectural form. The Sarakatsani used to move mainly in the Alpine zone (although since the 1930s they have settled permanently in the Zagori lowlands). The Vlachi move through and inhabit the forest zones, while the rest of the Zagorisians live in the cultivatable areas, woodlands and pastures. On the village outskirts live the Gypsies, who are musicians and specialist craftsmen (smiths, basket-weavers). The Metoikoi engage in auxiliary professions. From the outset of Zagorisian emigration (1750 onwards), the Vlachi and Zagorisians became merchants, supplying Zagori with wealth and education. They brought the ideas of the Enlightenment and contributed to the national awakening of the region.

The traditions and economic functions connected to emigration and nomadic and transhumant pastoralism contributed to the preservation of the natural environment: the rules pertaining to the use of the sacred forests of the area (vakufika), are an excellent example of sustainable development. 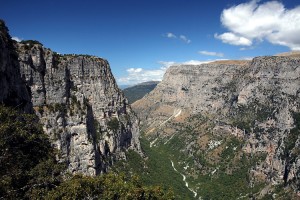 The natural environment, particularly in the area of the North Pindos Protected Park, displays a steep and varied terrain with great differences in altitude, ravines, gorges, rivers and numerous streams, each forming its own valley with completely different ecological and climatic characteristics. The bridges of Zagori, unique examples of the builder’s art, connect the river beds and link the network of paths and cobbled roads into a whole of singular beauty. The river water is a source of energy: mills are built on the banks, often close to bridges. The natural elements make up an impressive mosaic of biotopes, which in turn hosts a variety of ecosystems presenting high biodiversity at every level, both horizontal and vertical. This great variety is, of course, also expressed in the local flora. The Zagorisians are well aware of the medicinal properties of plants and this knowledge was cultivated reaching high performance by the famous Vikogiatroi (literally meaning “Doctors coming from Vikos”). They are folk healers whose knowledge is transmitted orally, from generation to generation, and heal people with the herbs they gather from the valleys of the River Vikos.

A particularly important and ecologically significant feature of North Pindos is the fact that it includes primary (native) ecosystems of remarkable genetic, ecosystem and species biodiversity, which are of value not only for Greece but globally:

· Large forests of conifers and beech at medium and high altitudes, and extensive oak forests on flysch and molasse.

· A large ophiolitic mass, largely modified into serpentine. The study area is the only site in Greece where this sublayer also extends into the Alpine zone and therefore hosts a unique variety of serpentine endemic plants.

· Impressive limestone formations, mostly vertical rockfaces and ravines. These formations are extremely important for the local bird life and terrain.

· Large numbers of self-sown plant species, particularly interesting with regard to their spread, population, biotopes and vulnerability.

The Pindos region hosts over 1,800 plant species, many of them endemic. The names Pindicus and Pindicola of some species known to date are descriptions indicating that the locus classicus of the species is on Pindos. The rarest plants are found on mountain peaks. Many of these are endemic to the Pindos range, or even to a single mountain in the range. The National Park is home to many rare, endemic and protected plant species.

The Aoos River System is the only place in the world where the Pindos Stone Loach (Oxynoemacheilus pindus) lives, a species which is not protected by law, although neither is it directly endangered. It is also the only Greek habitat of the Albanian Roach (Pachychilon pictus), an endemic species of the south Balkans, designated “rare” in Greece.

The villages of Zagori are an important example of a well-preserved natural and cultural environment. The ecological and geophysical conditions on the one hand, and the historical circumstances -particularly of the Ottoman period- on the other, might give the impression of a closed and impregnable cultural unit; however, this could not be further from the truth. The famous Zagorisian taksidiotismos (emigration and love of travel) originated from the special relationship of the area with the Ottoman administration. Zagorisian emigration, whose dramatic character is so eloquently reflected in the local folksongs (demotika tragoudia) and oral tradition, was linked to complex historical circumstances (concentration of land, heavy taxation, etc.). Gradually, emigration brought Zagori great wealth, which was invested not only in the exceptional examples of vernacular architecture (houses, bridges, churches, etc.) but also in the cultivation of letters and intellectual creativity in general. The multifarious influences from the Balkans, Central Europe and the Mediterranean, as well as Constantinople, Asia Minor and the Black Sea, were creatively assimilated and led to the shaping of the unique Zagorisian cultural identity, which is imprinted in the architectural vernacular of Zagori and in the rich oral, musical and dance tradition of its people. Their autonomous establishment and development through time, together with rich intangible cultural heritage that has evolved and been preserved in the area to the present day, make the Zagorochoria a unique example of combined cultural heritage (their particular vernacular architecture and oral traditions) and intact natural environment of universal value.

Criterion (iii): TheZagorochoria are an exceptionally important testimony to a cultural tradition that is interwoven with the particularity of the mountain landscape. The productive activities of the inhabitants are regulated by the restrictions of living in a mountainous area and the limited carrying capacity of intensive and extensive agricultural and livestock holdings. They are prime examples of a self-sufficiency culture.

Criterion (v): The exceptional architectural tradition of the Zagorochoria is organically linked to living traditions of social organisation, technical expertise, worldviews and cultural practices (cultures of Sarakatsani, of Vlachi etc, all integrated in the unique cultural expression of Zagori).

Criterion (ix): North Pindos hosts many native primary ecosystems, in which one can follow the evolutionary progress of genus and species ecosystems (Biogenetic Park – Valia Kalda). The ancient beech forests are an excellent example of evolution, having found refuge here during their spread around the Mediterranean basin (SE Europe). They also contain a priceless reservoir of genetic material that provides information on the history and evolution of the species Fagus sylvatica, which is inextricably linked to and dependent on the natural environment. The orchid family is also of particular interest, with numerous hybrids indicating the constant evolution of genera and species.

Criterion (x): The North Pindos National Park hosts many rare and endemic species of flora of particular ecological value, both to science and as regards their conservation status. Certain types of ecotope in the National Park are also considered very important on both a national and an international level, as they host many important plant species and are in a good state of preservation. A basic feature of the area is the multitude of plants endemic to the Balkan Peninsula and Greece, and also local endemic plant species. The presence of endemic species is due to the geomorphology, relative isolation and altitude of many sites (often above the tree line), which reveal the fascinating and often unique mountain flora. The alpine and sub-alpine biotopes constitute habitats of rare plant species, requiring protection and appropriate management.

← Crocus olivieri
A CNN article about winter in Greece →